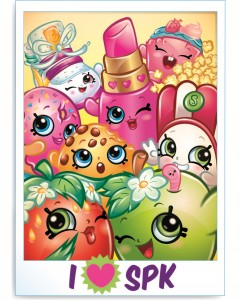 Bulldog Licensing has signed more A-list licensees for Shopkins, with Blueprint and Danilo both coming on board.

Shopkins are cute little characters that live in Shopville. There are over 140 characters to collect in each series, including a few ultra-rare characters, and they are sold inside adorable little shopping bags. The figures surrounding the property are staggering – more than 100 million characters have been sold to date, whilst over 36 million views have been recorded on the brand’s YouTube channel and there have been more than 420 million views of fan videos and webisodes featuring Shopkins.

Danilo and Blueprint add to a programme that is one of the fastest growing in the licensing sector. Other categories represented include toys, wheeled goods, apparel, publishing, bedding, arts and crafts, annuals, games, posters and amusement plush through top licensees such as Flair, Aykroyds TDP, Spearmark, Winning Moves, Character World, Pyramid and VMC.

“We’ve signed two more top licensees to add to an incredibly strong licensing programme.” says Bulldog Licensing Manager, Vicky Hill. “We are receiving a constant stream of enquiries and it’s no surprise as the reaction to the brand – both online and at retail – is simply phenomenal, with shops selling out of figures almost as soon they restock!”