Bullseye Biltong Deal In The Bag For Bulldog 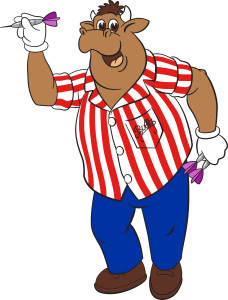 Bulldog Licensing has signed a new deal that will see Bully – the unmistakable emblem of legendary gameshow Bullseye – appearing on packs of British-made biltong.

Originally presented by comedian Jim Bowen, Bullseye proved to be a huge hit with UK audiences with its mixture of darts and general knowledge questions. Each week amateur darts players would battle it out for a selection of prizes, including Bully’s special prize, and some of the biggest names in professional darts would throw for charity. The show ran over the entire ITV network from 1981 to 1995 and regularly pulled in 13 million viewers per episode, with a peak audience of 19.8 million on Boxing Day 1989. ITV has since featured the show in two high rating one-off specials and the show is still on air through digital channel Challenge, which broadcasts Bullseye every single evening, often pulling in audiences over 200,000.

The new deal will see Bullseye-branded biltong hitting the market courtesy of The Biltong Farm – a Lincolnshire-based company that will supply the dried meat snack to pubs, clubs and bars.

“Bullseye enjoys huge brand awareness and this is a great use of the license, as I’m sure drinkers will be more than ready to dip into a pack of Bully Biltong! Over recent years the pub snack market has changed massively and I can think of no better brand to help promote the growth of Biltong as consumers look to move away from less healthy snack products” says Bulldog Licensing Manager Vicky Hill.