Bulldog Monkeys Around With Kimm & Miller! 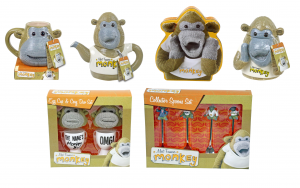 Bulldog Licensing has signed a deal with Kimm & Miller that has seen a range of merchandise featuring woolly legend Monkey hit shelves across the UK.

Monkey is a cultural icon and one of the most popular brands in Britain for the 16-34 year old consumer, with a huge following. Over 50,000 people ‘like’ the Monkey page on Facebook, which is fronted by Monkey and features pictures and videos featuring the famous simian thespian. The Monkey brand is owned by Comic Relief and profit from Monkey merchandise goes straight to the charity.

Kimm & Miller has developed a range of products, including mugs, trays, spoons, egg cups and teapots, which are available at leading retailers throughout the UK. Sales of the Monkey branded product range are proving extremely strong with fans of the anthropoidal actor queuing up for their furry fix.

“We are thrilled to be supporting Comic Relief by working with Monkey,” says William Pegg, Brand Manager at Kimm & Miller. “He’s an instantly recognisable character and one that brings a smile to everyone’s face, so I’m sure this range will fly off the shelves.”

Adds Bulldog Licensing Manager, Vicky Hill, ““This deal adds to the ever expanding presence of Monkey across UK retail and will boost the profile of a hugely popular character.”