Bulldog Licensing has revealed that a host of partners are already signed up in the UK for video game property Mass Effect: Andromeda – ahead of the game’s launch on March 23rd.

Mass Effect: Andromeda is the fourth instalment in the hugely popular Mass Effect series of sci-fi shooter games, developed by BioWare and published by EA, which has sold millions of copies worldwide and is acclaimed by critics as one of the greatest video game franchises of all time.In Mass Effect: Andromeda, the player takes the role of a Pathfinder – a soldier tasked with discovering new planets in the Andromeda Galaxy.

A host of licensees are on board for the brand licensing programme. These include Trademark and Insert Coin (both apparel), Rubber Road and Level Up Wear (both apparel and accessories) Imagine 8 (gift and stationery) and GB Eye (wall décor, badges, travel card holders, mugs, keyrings, stationery, glassware). Merchandise will hit shelves across a host of major retailer throughout Europe.

“Mass Effect: Andromeda is part of one of the biggest video game franchises on the planet, so there is huge anticipation about this launch,” comments Bulldog MD Rob Corney. “Licensees are understandably keen to tap into this excitement and there is a very strong programme in place, which is only going to get bigger – as this is one hot brand!” 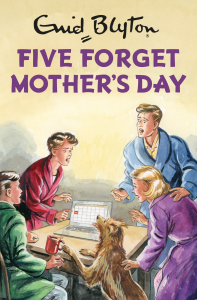 Five Forget Mother’s Day – the latest title in a series of tongue-in-cheek parodies of Enid Blyton’s most famous books – has shot to No. 1 in the hardback non-fiction chart.

Other titles in the series – such as Five On Brexit Island, Five Go on a Strategy Away Day and Five Give Up the Booze – have all made it into the top ten and overall sales for the series now top 1,000,000.

The books tap into the nostalgia for Enid Blyton’s work, which also includes Malory Towers and the Secret Seven and has delighted successive generations of British children and sold hundreds of millions of copies. Enid Blyton’s books regularly feature in the top ten list of the best-selling authors in the UK and are also popular across the world, making her the fourth most translated author in history, after Agatha Christie, Jules Verne and William Shakespeare.

The brand is represented by Bulldog Licensing, who are launching a full The Famous Five programme this year to coincide with the 75th anniversary of the first book, with stationery, gift and food products all hitting the shelves. Bulldog will then look to expand across the Secret Seven and other titles in the estate.

“These books have struck a huge chord,” says Bulldog Licensing Director Vicky Hill. “Everyone grew up with Enid Blyton’s work, so there is huge nostalgic appeal in anything connected to these timeless stories.” 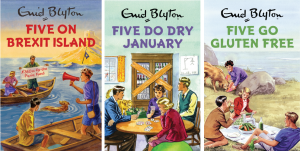 As the public appetite for Enid Blyton’s The Famous Five continues, on the back of Quercus’ best-selling Enid Blyton for Grown-Ups series, Bulldog has also seen the expansion of its licensing range, with Danilo on board to create a range of Blyton greeting cards.

This year, Bulldog Licensing, which represents the entire Enid Blyton brand, has lined up a full programme for The Famous Five to coincide with the 75th anniversary of the first book, with stationery, gift and food products all hitting the shelves.

The success of the Enid Blyton for Grown-Ups series demonstrates the enduring popularity of The Famous Five brand, which Enid Blyton Entertainment (EBE) initially licensed to Quercus in 2016. The tongue-in-cheek books have dominated the non-fiction charts since launching in November; Five on Brexit Island was the bestselling book in the UK in the week before Christmas 2016 and remains in the top ten. The latest addition to the series, Five Forget Mother’s Day launched on February 23rd and is now at number 2 in the non-fiction book charts.

Katie Price, Licensing Director, Hachette Children’s Group commented: “The books tap into the nostalgia for Enid Blyton’s work, which also includes Malory Towers and The Secret Seven among others and has delighted successive generations of British children and sold hundreds of millions of copies. Enid Blyton, who still sells a book a minute in the UK, regularly features in the top ten list of the best-selling authors in the UK. As the fourth most translated author in history, after Agatha Christie, Jules Verne and William Shakespeare, Enid Blyton has proven global appeal and is the most translated children’s author in the world, according to UNESCO.”

“The popularity of these books amply demonstrates that Enid Blyton is part of our national fabric,” says Bulldog Licensing Director Vicky Hill. “Her work has massive nostalgic appeal for adults, while kids are as entranced by the stories as they ever were – so there is huge brand awareness out there for licensees to tap into.”

Bulldog will shortly be looking to expand across the Secret Seven and other titles in the estate.