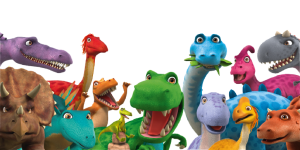 Winning Moves will be launching The World of Dinosaur Roar! Top Trumps card game in Spring / Summer 2018. The game will be widely available at high street, department store and supermarket retail, as well as online. The core market for the game is expected to be pre-school children and families, but dinosaur fans of all ages will also love this new version of Top Trumps.

The Top Trumps cards will feature the brand’s colourful dinosaur characters but will also include facts and figures about each dinosaur, verified by Professor Paul Barrett of the Department of Earth Sciences at London’s Natural History Museum.

In the longer term the property may appear in board game format as well: Winning Moves also has the rights to other board game versions of The World of Dinosaur Roar!

The agreement was developed and finalised by licensing agent Bulldog Licensing, one of the industry’s leading licensing agencies, on behalf of property owner Nurture Rights.

With its large cast of memorable characters and engrossing storylines, The World of Dinosaur Roar! is already attracting licensee interest as a property with potential across a wide range of categories and merchandise aimed at a core market of children aged 2-5, as well as gift givers and dinosaur fans everywhere.

With Golden Bear on board as master toy partner, set to launch a major range of product for autumn 2018, Macmillan Children’s Books the official publishing partner for the property, and this latest agreement with Winning Moves, licensing agents Bulldog Licensing are set to make a number of partner announcements for this popular brand.

Charlotte Waalkens, Licensing Manager, Winning Moves, said: “The exciting, colourful characters in The World of Dinosaur Roar! are perfect for card games – and our popular and much-loved Top Trumps game is the ideal stage for these larger-than-life characters. We’re certain that kids and adults alike will love this dinosaur-themed editions of their favourite game.”

Nick Barrington, Managing Director of Nurture Rights, added: “We are delighted to have the opportunity to bring together The World of Dinosaur Roar! and a respected leader in the games field. Winning Moves has done a great job in bringing this entertaining, beautifully illustrated and educational property to this iconic game.”