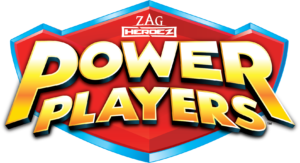 Bulldog licensing is in discussions with a range of potential partners for the new Zag Studios animation which launches in the UK on Cartoon Network this month.

The new partnership will see Bulldog Licensing managing the licensing programme in the UK and Eire for the new fun show with real stakes, large laughs and over-the-top action. The agency is in negotiation with licensees across a range of categories including apparel, home, gifting, publishing and more.

The toy range from Playmates, distributed in the UK by Flair, is readying for release in Q4, along with other core merchandise, and will feature action figures, vehicles and role play items at launch. Retail reactions to the new line at the recent toy shows has been phenomenal and the range will be supported by a heavyweight marketing programme.

The TV debut will consist of 78×11’ episodes about the super-powered characters disguised as toys led by Axel, a human boy, who joins the smart toy world he is partly responsible for creating. Courage, comedy and stunning visuals combine in an action-packed show filled with engaging characters.

Rob Corney, MD, Bulldog Licensing, comments: “We’re thrilled to welcome Power Players into the Bulldog family. The fun, fast-paced series is a real showcase of the huge talent at Zag, and the strong characters and storylines have made for a colourful and creative style guide which will inspire leading licensees across categories.

“Our initial discussions with potential partners have been overwhelmingly positive, and we are looking forward to announcing new deals and rolling out the consumer products soon.”