Bulldog works with The Knot Churros and Bubblewrap Waffles to create unique desserts for the Care Bears anniversary. 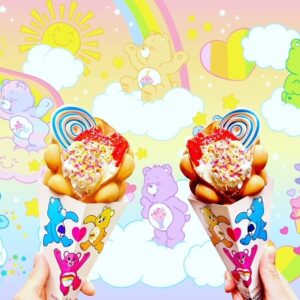 First created in 1982 and loved by fans young and old, Care Bears™ is an iconic brand celebrating its 40th anniversary this year. Lending itself to plenty of consumer products, the licensing programme for Care Bears™, managed in the UK by Bulldog Licensing, already boasts several innovative lines.

In a continuation of the Care Bears™ 40th anniversary celebrations, Bulldog is now working with a variety of food outlets to maximise the brand with fun collaborations. Food collaborations in other territories have been extremely well-received, so as a UK first, The Knot Churros – home to a delicious range of unique desserts – created a special Care Bears menu.

An afternoon tea menu of churros featured different combinations of ice-cream with toppings such as candyfloss and sprinkles with each churro named after fan-favourite bears including Cheer and Funshine, as well as the special 40th anniversary bear, Care-a-Lot. The campaign ran for a month during the summer holidays, was supported across social media and saw a great reaction from customers.

Sophie Yates, Brand Manager at Bulldog Licensing, commented: “The Care Bears property is such a strong one with huge appeal to children and adult alike, so it’s a great brand for fans of all ages to enjoy together. Core values of sharing and caring lend it so well to food collabs, and our partners can have a lot of fun bringing colourful and delicious Care Bears products to life! The eye-catching treats draw fans and create fantastic content for social media. It has been exciting to see how well the collaboration with The Knot Churros was received and we look forward to the response to Bubblewrap Waffles.”